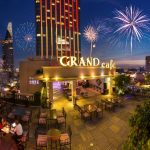 The Hotel Grand Saigon – A modern comfort in a very classical French atmosphere and architecture since 1930 is the ideal place for business travelers as well those seeking rest and entertainment. Above A CORNER OF ANCIENT WING where is magnificent guest rooms and suites located, heir to nearly a hundred year legacy of culture and excellence. It was a small beverage shop, located at the corner of Dong Khoi st. (Catinat) and Ngo Duc Ke st. (Vannier)